Thirupurambiyam is situated on the river side of Kollidam 11Kms away from Kumbakonam. During the great deluge, flood stopped away from the village. Hence it is known as Thirupurambiyam. For a lady merchant, this temple Lord Siva went to Madurai and reported as an evidence against her case. Hence the name of the god is known as Satchinathar. Pralayam Katha Vinayakar Temple, literally translated as the Ganesha Who Saved the World from Pralaya (Great Deluge). The Ganesha at this temple is unique from all others and his importance is paramount. During the Krita Yuga, Lord Siva asked Lord Ganesha to save the world from the Great Deluge caused during the gestation period of Rahu. Lord Ganesha created a well on the east side of the temple tank and channeled all the 7 seas into that well and controlled the deluge and saved the world.

This well is known as Yezhu Kadal Kinaru. Lord Varuna created an idol of Lord Ganesha from sea shells and other materials obtained from the sea and worshipped Him as Pralayam Katha Vinayakar.This Idol of Ganesha is still worshipped in this temple. On the night before Ganesha’s Birthday, a special abishekam is being performed for this Ganesha idol only with honey. This (Thenabishekam) abishekam with honey is performed all through the night. During the abishekam it is a wonderful experience to watch that all the honey that is being poured on the idol is being drawn into the idol. At the end of the abishekam the Ganesha deity turns a crimson color. No abishekam is performed during the rest of the year. Hence in order to save the world from destructions and protect, Astroved is performing the Ganesha Birthday in this temple.The place is sung in the Thevaram hymns of Thirugnanasambandar, Sundarar and Thirunavukkarasar.The temple theertham are known as Brahma Theertham, Saptha Sahara Theertham, River Manniyaru and River Kollidam. Agathiyar, Pulasthiyar, Sanahar, Sanandhanar and Viswamithrar are said to have worshipped here Lord Siva and got grace. 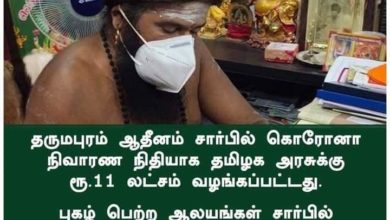 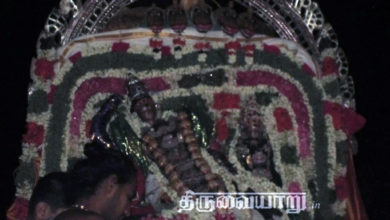 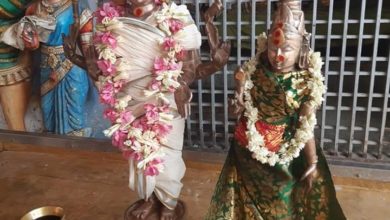