Alangudi is the divine place, where Lord Guru can be propitiated in the form of Sri Dakshinamurthy. This sacred shrine of Jupiter is renowned for its tri-glories, i.e. Moorthy (The Presiding Deity), sthalam (Place of divinity) and theertham (The Holy Water). Lakhs of people throng his place, particularly on the day of Jupiter’s transit to the next sign., to solicit Jupiter’s protection from afflictions. Lord Jupiter’s benign look (Drishti) can shower a lot of blessings from him. He is Deva guru. He is also known as Brihaspathi, due to his excellence in education and fine arts, possessing supreme intelligence.

About Alangudi :
Alangudi is the holy abode of Jupiter and a divine place where one could propitiate Jupiter. Lord Shiva is manifested here in the form of Lord Guru. Sri Dakshinamurthy is to be worshipped as he is worshipped, as Guru Bhagwan here. Alangudi is renowned for its ‘triglories’ i.e Moorthy (The Presiding Deity), Sthalam (Place of divinity) and Theertham (The Holy Water).

Alangudi and its hoary past:
274 Sthalams of erstwhile Chola Country have been sung in Devaram and Alangudi is one among the 127 Sthalams, situated on the southern banks of Cauvery river. Sage Sukha, Rishi Viswamithra, Sage Agastya, Adisankara and several other hoy men have worshipped at this shrine. The Lord of this Sthalam is Swayumbhu (Natural origination of the idiol). Hence, the period of this temple could not be fixed accurately. The temple is existing from ancient times.

Temple Construction:
This temple was believed to be constructed by an ardent of Lord Shiva. ‘Amuthokar’, the minister of the King Masukuntha Chakravarti. He was beheaded by the Chakravarti, as he refused to give half of his Punya, (merit) to the King. On his death, the sthalam reverberated with the sound ‘Amuthokar’. The King got frightened at this constant diabolic echo, realizes his mistake and worshipped the Lord Abadsahayeswarar with ardent devotion. Then, he was relieved from all Doshas.

Holy Sthalam:
Alangudi is a tiny village in Thiruvarur Dt. of Tamil Nadu. It is 7 Kms South of Needamangalam Railway station and 17 Kms South of Kumbakonam, on the road that leads to maanargudi. Kasi Arranyam, Thiru Erumpoolai and Alangudi are the names by which this holy place is known. The Divine poet, Thirugnanasambandar has blessed this Sthalam as beautiful place filled with flowers.

Sthala Vruksha (The Holy Tree):
Poolai Shrub is the holy tree of this Sthalam and it is an object of worship here..

Theertham (The Holy Water):
Alangudi is surrounded by three holy rivers. They are Cauvery, Kolidam and Vennaru. Fifteen theerthams are around this temple, among which the Amrita Pushkarani encircling the temple is very famous. Chakra theertham is in front of the temple. It is said that this theertham, was created by Maha Vishnu’s Chakra (Disc).

Miraculous Episode:
Once a Chola Raja, who ruled over Thiruvarur, was fascinated by the idol of Sundaramurthy at Alangudi and desired to have it installed at Thiruvarur for worship. On learning this, temple priest at Alangudi become panic stricken. He disguised the idol as a child affected with chicken-pox, hid it inside a swing and brought it back safely to Alangudi. The traces of Chicken-pox can still be seen on this image. What a miracle! It reinforces our Spiritual faith in the Almighty even in this Kali yunga! 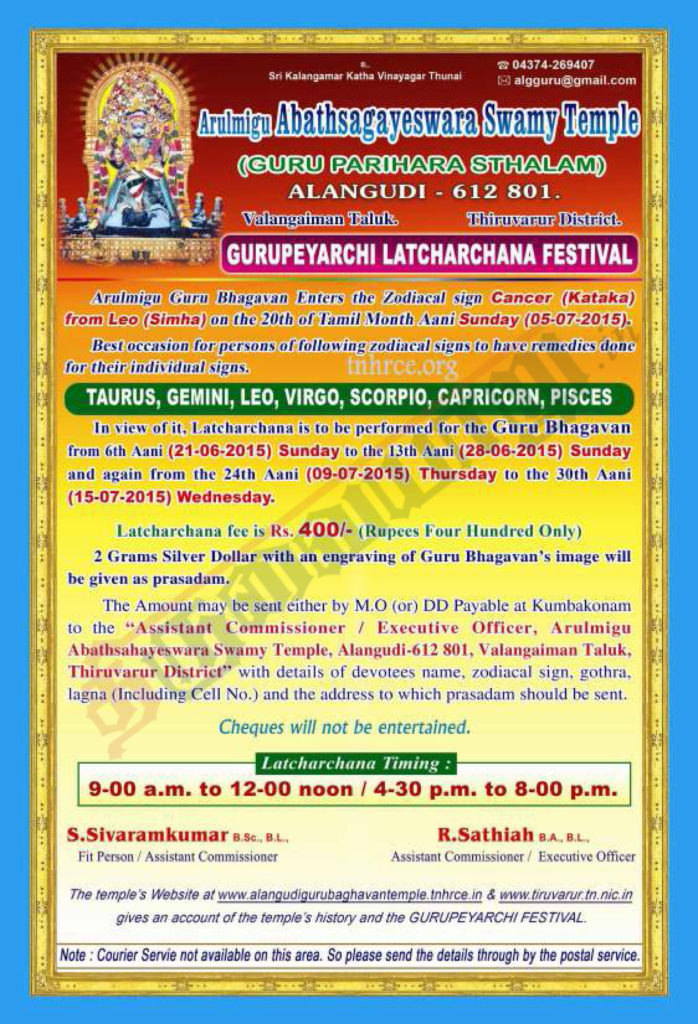 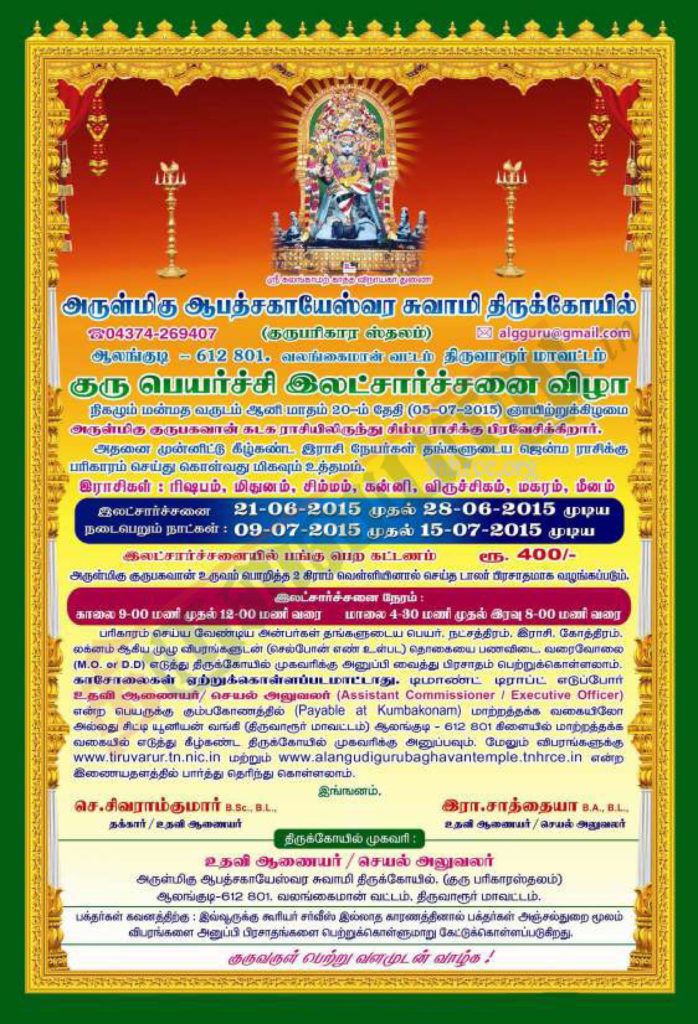 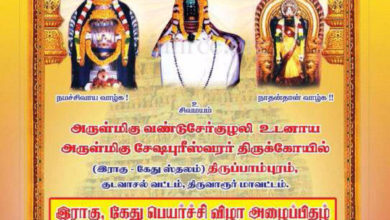